The Our Mutual Friend Reading Project

Being Bella: Adventures in the Dickensian ‘Twittersphere’

This short piece reflects on the pleasure and poignancy of masquerading as Bella Wilfer in the digital realm.

To anyone considering the idea, I can highly recommend a two-year Twitter masquerade as Bella Wilfer (@OMF_Bella). She’s a character who can bewitch and madden in equal measure, brimming with energy, which meant that her digital experiences had to be as rich and varied as her life in literature.

My Bella tweets in ‘real’ 1860s time, and as a young woman maturing under the public eye, Twitter is her natural habitat. Nowhere else can you find such a high concentration of teenagers performing an identity, be it ‘worldly girl’ or ‘young matron’. Like them she is hungry for understanding and appreciation, glorying in status symbols, but thirsts for human connection too. In my — entirely biased — opinion, she’s endowed with some of the pithiest, wittiest, and most memorable lines in the novel. As a result, the bulk of my contribution to the project was made up of verbatim tweeted quotations from Bella’s conversations with other characters, and ideas from her internal monologue. I envisaged my feed as a sort of social media appendix to the novel, which was designed to reward the reader of each instalment who delighted in Bella’s antics and her sheer enthusiasm for her world.

As Bella observes on the day of her wedding, it all began with a ‘detestable bonnet’1 — the implement with which she beat her father in the park, attracting old John Harmon’s interest and making her the subject of his most interesting will — and I’ve given her interest in fashion full rein, wherever the machinations of the plot aren’t all-consuming. As the Twitter project began I was in the midst of researching 1850s and 1860s fashion for a chapter of my thesis; what a godsend Bella’s 1864 accession to wealth was! Extant fashion from the era is overwhelmingly made up of pieces from the wardrobes of the well-off and well-socialized, and while the Bella of Holloway would have remodelled her 1850s gowns as best she could, her abrupt ascent into polite (vulgar) company must have meant that she could gorge herself on a diet of fashion-plate fantasy (Figs. 1, 2). During her time with the Boffins I clothed her in a fictional wardrobe of pieces so ostentatious that they would have caused even Cecil Beaton to demur. Whenever browsing fashion plates and photographs of the era my mind would turn to Hippolyte Taine’s 1872 protest that the colour saturation and profusion of trimming on an Englishwoman’s dress could leave no doubt that there was ‘something peculiar in the condition of the English retina’.2 Such hyper-fashionable clothing represents the sense of freedom which Bella’s newfound wealth brings her, but also its spurious value and transitory beauty; her characteristic playfulness suffers from being surrounded by so much luxury. 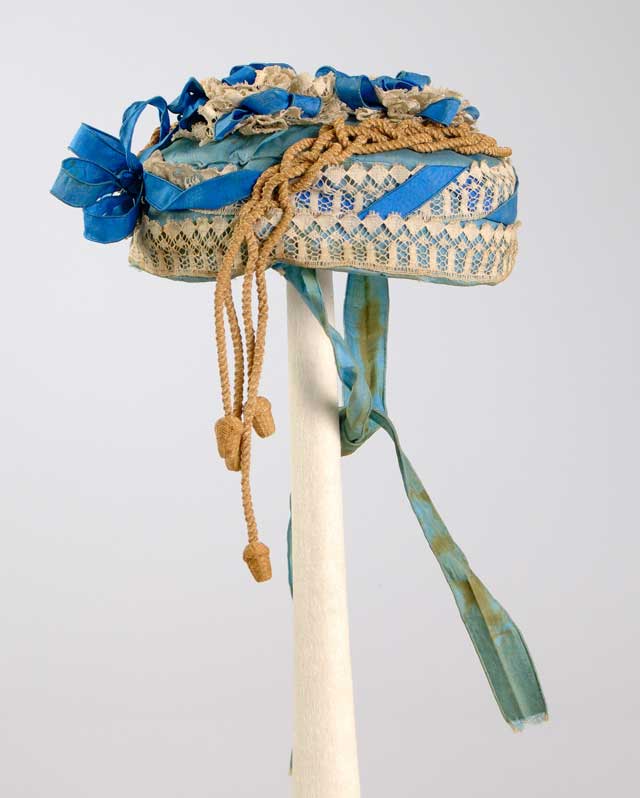 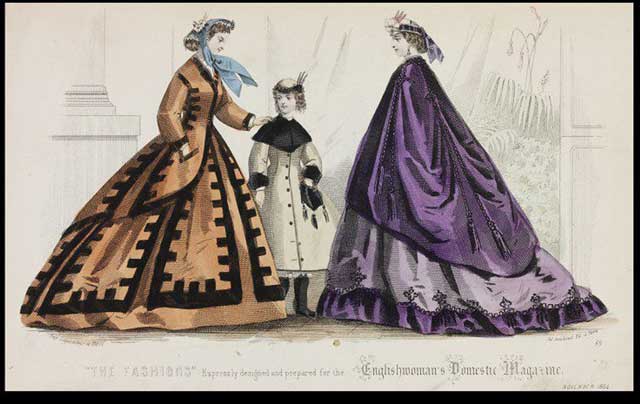 Bella is attuned to cultural developments too, and her encounters with contemporary life such as novels and exhibitions, etiquette, and even medications (many of which are advertised in the monthly instalments) have become fodder for tweets:

Trollope again — he has a flair for titles, my latest is ‘Can You Forgive Her?’, to which I suppose the answer to be ‘no’ #odiousauthors (@OMF_Bella, 4 January 2015)

I may be spoilt, but I pay for it — in knowing that I am #speculatedupon like stocks and shares. #marriagemarket (7 January 2015)

In constantly trying to convey the brio of her characterization I’ve found hashtags invaluable, indulging her with the more wonderfully flippant hashtags of her twenty-first-century peers, as well as trying to merge the succinct observational style typical of both Dickens and Twitter in devising my own. Among my favourites are: #prettypeopleproblems, #getintomywardrobe, and #turningintomymotheralready, alongside more era-specific and ‘meta’ contributions like #blackisthenewmauveine, #trialsofaliterarycharacter, and #whatwouldDickensdo.

The social acumen which Bella displays can sometimes contrast with a lack of emotional understanding, which makes an interest in how Twitter categorizes and labels perception and expression an integral part of her character. Its tools also provide a way of articulating feelings and interests which she doesn’t consciously register, but which Dickens’s wry authorial voice accounts for in the written narrative. She might profess disdain for John Rokesmith (@OMF_Rokesmith) early on, but the frequency of their interactions and her eagerness to devise hashtags in response to his behaviour belies her words. Estranged as she is from the narrator’s commentary, she becomes more of an isolated character in the ‘Twittersphere’ (pace Dickens) than in the novel. In its absence I felt responsible for portraying her development, since without that affectionate but censorious context her actions seemed crueller, and her greed more naked. The frustrated romance plot was particularly important in that respect, since Dickens is so skilful at demonstrating how burgeoning feelings for Rokesmith provoke self-revelation; she comes to understand that she longs for money because it embodies security, and grows to despise the suitors who see her as a financial prospect rather than a person, and even the circumstances and people who thrust money and status upon her.

Taking part in the project has made me a more disciplined reader of Our Mutual Friend, but also a more speculative one. I had never managed to schedule my reading of Dickens according to the serial format before, and so experiencing the fictional world as Bella means that I can revel in the detail of each instalment, and it enforces a ‘no spoilers’ digital doctrine which makes even minor developments in the plot feel surprising. Bella discovers her feelings as they blossom, on the page as well as the screen. Even small moments in the text seem suddenly illuminated, and glimpses of the rich internal life of even the most incidental of characters through her eyes conveys a sense that, as she develops, her world is aglow with possibilities. My role as Bella has not required me to find the nooks and crannies of the story, as it has for others, but has been to reaffirm her depth and complexity even as she plays the part of the heartless minx.

This has been a wonderful opportunity for collaboration with other Dickens enthusiasts, since a successful digital Bella relies on her chemistry with key characters such as @OMF_Rokesmith and her beloved Pa, Reginald Wilfer (@OMF_RegWilfer). Scheduling a proposal may seem unromantic, but the frisson of the first scene between Rokesmith and Bella had the same effervescent blend of misunderstanding and desire that it has on the printed page. One of my fondest memories of taking part in the project has the flavour of the communal reading experience which was the hallmark of many of the novel’s original readers: Emma Curry, playing Lizzie Hexham (@OMF_Lizzie), and I sat side by side in one of Birkbeck’s Victorian garrets, poring over the scene in which the two heroines make their first overtures of friendship.3 We devised our tweets as we read, marvelling at how little we could bear to leave out of the scene, appreciating Dickens’s skill in capturing the thrill of finding a new friend to ‘follow’, whether in the digital, fictional, or ‘real’ worlds.