Biography of Lucy May Perkins.

American art historian, dealer, and museum professional specializing in Sienese art and Egyptian antiquities, Perkins (née Olcott) (Fig. 1) grew up in New York, where she attended the Normal School (now Hunter College) and graduated in 1897. Travelling in Italy with her mother, she met her future husband, the art historian Frederick Mason Perkins (1874–1955). In 1900 she travelled to India to visit her uncle, Henry Steel Olcott, the co-founder of the Theosophical Society with Helena Blavatsky. When she returned to Italy she married Perkins and they settled in Siena. There, Olcott co-authored the bestselling Guide to Siena (1903) with the historian William Heywood. Through Perkins, Olcott became friends with Mary and Bernard Berenson. The two couples collaborated on several articles published in the Burlington Magazine in 1903: ‘A Sienese Painter of the Franciscan Legend’ (Parts I and II), officially authored by Bernard Berenson, and ‘Andrea Vanni’, officially authored by Perkins. Olcott was the solo author of several articles on lesser-known masterpieces in the Sienese region in Rassegna d’arte between 1904 and 1907. She also contributed to the arrangement of the textiles for Siena’s monumental Mostra dell’antica arte senese in 1904. When Olcott’s marriage to Perkins broke down after a violent altercation on the streets in Siena, she fled to the United States. There, she found employment at the Metropolitan Museum of Art, New York, compiling a new collection of reference photographs for the library, later working as the museum’s first docent. When her affair with curator of European painting Bryson Burroughs became known, Olcott returned to Italy at the invitation of Mary Berenson, to work as Berenson’s secretary for a year. From 1911 she worked independently as a private dealer, with clients including the socialite Rita Lydig. Olcott developed her second specialism in Egyptian art thanks to her friendship with the amateur archaeologist Theodore M. Davis. She had been on-site in 1905 when Davis’s workers found the tomb of Yuya and Tuya, then the richest royal burial uncovered to date. She was later employed to acquire Egyptian antiquities for the Cleveland Museum of Art beginning in 1912. Olcott spent the last eight years of her life in mental asylums, in England and then in New York. 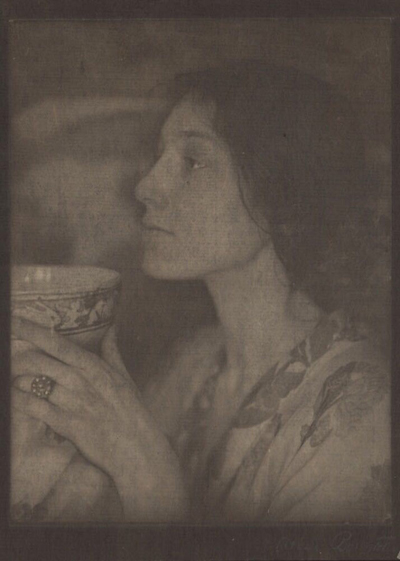