Paintings from the Reign of Victoria: The Royal Holloway Collection, Yale Center for British Art, New Haven, Connecticut, 7 May – 26 July, 2009

This review considers the exhibition Paintings from the Reign of Victoria: The Royal Holloway Collection, shown at the Yale Center for British Art, New Haven, Connecticut, from 7 May to 26 July, 2009. It includes discussion of key works from the Holloway collection, including William Powell Frith's The Railway Station (1862) and Edwin Landseer's Man Proposes, God Disposes (1864), and interviews with visitors to the exhibition.

In 1876, when William Powell Frith’s painting The Railway Station (see fig. 1) was first exhibited to American audiences, the critical fortunes of the artist – and with him, a certain brand of Victorian representation – were already beginning to wane. At the Philadelphia international exhibition marking the centenary of American independence, Frith’s painting was among the objects representing Great Britain to its former colony. ‘It is not altogether an attractive work,’ wrote one American reviewer, ‘and it is one of those paintings which most certainly owe their fame and popularity to the engraver.’ 1 Leaving aside for the moment the question of attractiveness, the reviewer was not wrong about the importance of engraving to the work’s fame. First exhibited to great acclaim in 1862, the painting generated spectacular profits through the sale of three separate but related commodities: the physical ownership of the work, the exclusive right to display it, and its copyright, the latter being by far the most lucrative. By the time the work was exhibited in Philadelphia, however, these sources of profit were largely exhausted, and six years later the collector Thomas Holloway was able to purchase the painting for a relatively small sum, adding it to the collection of a women’s educational institution that he had recently founded. Today, the painting returns to the United States as part of the exhibition Paintings from the Reign of Victoria: The Royal Holloway Collection, currently on view at the Yale Center for British Art, New Haven, Connecticut, the third stop on a seven-venue tour. In the interim between 1876 and 2009, the reputation of Victorian painting has been trashed, debated, re-evaluated and at least partially rehabilitated. But what do American audiences make of the Railway Station and its companions in the Holloway collection today?

‘Some people prefer that French Impressionist stuff’, noted exhibition visitor Howard Mayer, of New Haven, with a twinkle in his eye. But to him, the Royal Holloway show is ‘wonderful’. The collection Mayer admires was the brainchild of Victorian entrepreneur Thomas Holloway, who put it together in a brief but vigorous buying spree between 1881 and 1883. Holloway made a fortune selling cure-all pills and ointments, and he devoted the end of his life to philanthropy, including endowing a women’s college. Late in its development, he decided the college should have a first-rate art collection. Thus began a three-year venture into the art market, during which he bought almost exclusively from Christie’s auctions and set sale room records. The result, as viewers of the exhibition in New Haven noted, is an extremely varied ensemble.

Entering the exhibition, one is greeted by a remarkable juxtaposition: Frith’s Railway Station and Edwin Landseer’s Man Proposes, God Disposes (1864, see fig. 2), two works alike in size, format, and little else. Frith’s painting presents a brilliantly choreographed jumble of figures assembled alongside a departing train. In contrast, Landseer’s painting has only two protagonists, but what protagonists they are: two snarling polar bears, making a presumably meagre meal of a wrecked ship’s flag and some caribou bones. Despite the ferocity of the scene, Landseer’s trademark virtuosity in painting fur encourages closer looking. Particularly delightful are the tactile contrasts between downy polar bear coats and the icy sheen of the glaciers. Frith’s work lacks this bravura handling; looking at it, you can sense how hard the artist fought for every well-crafted visage and convincing piece of cloth. But in its place is the marvel of Frith’s orchestration of dozens of figures, moving in inexorable sweeps and curves across the canvas, from an anxious pet owner trying to sneak a lapdog on to the train at left, to a white-collar criminal being apprehended at right. Frith’s painting is not only attractive, despite the opinion of the 1876 reviewer, it is absorbing. This is a painting that needs to be walked in order to be appreciated: the abundant detail encourages the viewer to move back and forth in front of the painting, savouring individual vignettes, and on my many visits to the exhibition, it was a pleasure to see people doing just that.

For one viewer, the indelible memory of the show will be another pair of paintings, two Social Realist works hanging side by side in the second room of the exhibition, Luke Fildes’s Applicants for Admission to a Casual Ward (1874, see fig. 3) and Frank Holl’s Newgate: Committed for Trial (1878, see fig. 4). The visitor, who wished to be known only as ‘a descendent of those who came over on the Mayflower’, found the exhibit ‘startling [...] light and dark’. She was particularly struck by the ‘dichotomy between rich and poor’. As noted in the exhibition wall texts, the stark depiction of poverty in these works contrast strangely with the romanticized visions of rural and coastal life that fill the next several rooms. Walking around the show, said Edith Ziegler of Charleston, Rhode Island, one wonders ‘what Holloway wanted to teach these girls’ through the art he bought.

This last point is an important one; as the exhibition text announces, this collection was ‘the first in Britain specifically designed for female viewers’. But what does this mean? What can this collection tell us about the relationship between a collector and his intended audience? Or about the art – and art market – of its time? Despite occasional resonances between the works in the collection and Holloway’s biography or the institution’s mission as a college for women, it is difficult to construct a larger narrative theme from the collection. Rather, as the opening contrast between Frith’s train station and Landseer’s polar bears suggest, the collection is most effective in its variety, demonstrating the range of objects available on the market during Holloway’s buying spree. But, as Dianne Sachko Macleod argues convincingly in her catalogue essay, Holloway did not simply snatch up everything he saw. He evinced decided preferences in his collecting, including what is to my mind a lamentable and inexplicable neglect of the work of Sir Lawrence Alma-Tadema.

This very particular ensemble of British paintings is for the moment nested within another collection, equally inflected by the vision of its founder: the Yale Center for British Art. The Holloway exhibition’s current location provides a fascinating opportunity to compare two collections that present very different visions of the history of British art. Like the Holloway collection, the Yale Center for British Art’s holdings are largely the gift of one man, Paul Mellon, and the similarities do not end there: both started collecting British art relatively late in their lives, having begun with continental art; both were endowing educational institutions with a ready-made collection; and both shifted the art markets of their day by what they chose to buy and the prices they were willing to pay for them. Mellon’s collection had a much longer gestation and encompasses a broader chronological range, yet this range rarely included the later Victorians, the painters of the 1860s-80s who make up the bulk of the Holloway collection.

As the origins of both groups of works demonstrate, collecting, then and now, is fundamentally an economic as well as an aesthetic activity. Obvious as that statement is, it bears repeating, especially in a moment when many institutions are experiencing financial strain. Paul Mellon and Thomas Holloway did prize some artists in common, but that fact is made more difficult to discern by a recent change to the Holloway collection. In 1992, in the midst of a funding crisis, the college decided to sell works that Holloway purchased by John Constable, Thomas Gainsborough and J. M. W. Turner. Nor is Royal Holloway College alone, as evidenced by recent, controversial moves to de-accession works by American institutions, including the National Academy of Design, New York, and Brandeis University, Boston – both organizations that, like Royal Holloway, are juggling educational and preservationist missions. Although the Royal Holloway’s sales are dealt with forthrightly in Tim Barringer’s introduction to the catalogue, the de-accessioned works are visually absent from the publication. Only one is reproduced, and that in black and white, missing the chance to reconstruct the visual ensemble created by Holloway, at least within the covers of the catalogue. Barringer notes that the absent works are like ‘shadows’. In their palpable absence, they brought to my mind the Isabella Stuart Gardner Museum, Boston, another highly idiosyncratic collection of the late nineteenth century. After a devastating theft in 1990, empty frames mark the places once occupied by stolen works (due to the terms of Gardner’s will, the hanging cannot be rearranged to mask these absences). In the case of the Holloway collection, however, the culprit is not art thieves, but economic necessity. In both its inception and its recent alteration, the Holloway collection demonstrates the inextricable relationship between collecting and market forces.

The hard truth is that the later Victorian portion of the collection is still intact because these paintings are still less valuable, in an economic sense, and valued, in a cultural sense, than blue-chip British artists such as Gainsborough or Turner. If there is irony here, there is also much to be thankful for; the bulk of the collection has been preserved intact, and is now being shared with an extensive audience as a travelling exhibition. Not every work in the show is likely to change the still-pervasive opinion of Victorian art. Yet its luminous standouts, including the vivid bustle of Frith’s Railway Station, the mesmerizing awfulness of Fildes's Casual Ward, and yes, the sheer charm of Briton Riviere’s Sympathy (see fig. 5) – which, in its depiction of a sulky child and her canine companion, embodies all that has been scorned about the art of this period – have potential to do so. As one visitor noted with enthusiasm, these are paintings that ‘make you want to look’. 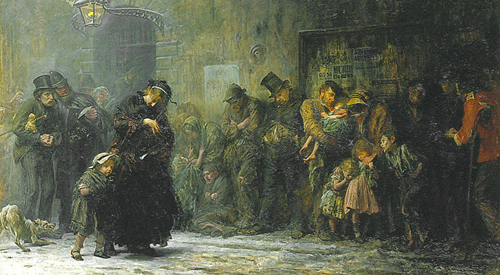 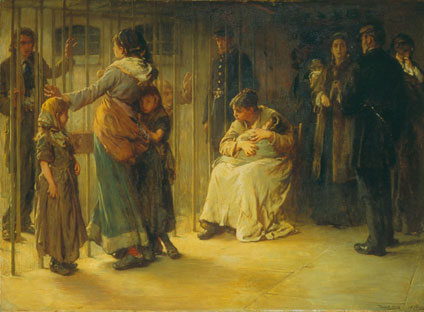 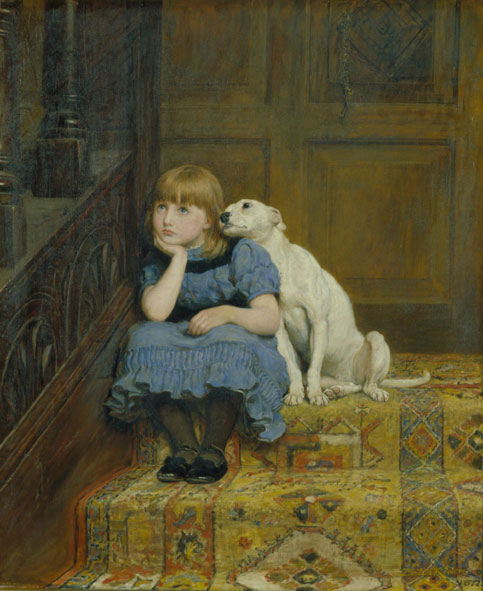