Poet, salon hostess, and author of one of the first, and most substantial, travel narratives written by a British woman traveller in the eighteenth century. Anna Riggs Miller’s Letters from Italy, published in 1776, recounts the Italian part of her Continental trip made in 1770 and 1771 (Fig. 1). Undertaken for economic reasons, to alleviate the cost of the new house and garden Miller and her husband had built at Batheaston in Somerset, the trip took them to Paris, where their son was born, and then on an extensive tour of Italy. An insatiable traveller, Miller gives remarkably detailed accounts of Italian masterpieces and landmarks. Her command of art historical categories stands out and so does her confidence. Seemingly unhampered by constraints of class and gender, she challenges previous male travellers’ opinions, thus asserting her authority over artistic matters in her Letters. 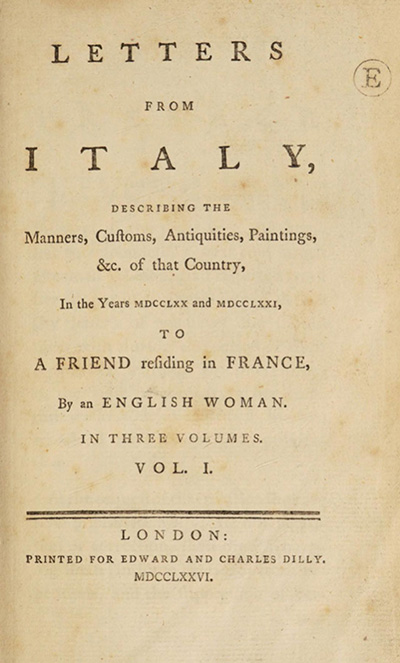 Upon her return, she used the fame brought by the publication of her Letters to set up a poetry circle. Lady Miller, as she became known after her husband was created an Irish baronet in 1778, held regular assemblies at her villa. Her gatherings became popular social events despite being criticized by socialites who did not take her provincial circle seriously. Interestingly, Lady Miller’s poetical events and literary contests revolved around an Etruscan vase she had brought back from Italy, which had been excavated near Frascati. While reminding her visitors of her grand tour experience, the vase, in which contestants would place their pieces of poetry, displayed her transformation into an art expert and collector, thus further performing her artistic expertise. It became such an emblem of her that it was reproduced by sculptor John Bacon on her monument in Bath Abbey.