In the build-up to the Darwin anniversary year the historian of science Peter Bowler tried to imagine a world without Darwin.1 No Origin of Species, no natural selection theory, no Darwin legacy. What then? The suggestion was increasingly attractive during the course of 2009, with its hundreds of festivals worldwide, high-profile exhibitions, publishers’ displays, feature films, documentaries, docu-dramas, stage plays, operas, ballets, radio shows, open-air theatre, life-sized cardboard cut-outs of the bearded one, “casino quality” playing cards etc (see figure 1). The ‘historical Darwin’ was often absent from the proceedings, which proclaimed his contemporary importance across the sciences, humanities, and arts, or which used the occasion as a platform for current research or polemical debates (e.g., evolutionary psychology and intelligent design).2

Perhaps the most enjoyable event of the year was a quiet one which came at the end of November, celebrating 150 years since the publication of Origin. It was held in the house of Darwin’s publisher John Murray off Albemarle Street in London, still furnished as it had been at the middle of the nineteenth century with heavy drapes and gilded picture frames (Lord Byron in ‘native dress’, Walter Scott with his favorite deerhound ‘Maida’), rooms with book-lined walls including a shelf of quarto volumes with green embossed spines, from Origin to Earthworms. By the late 1860s, Darwin was often simultaneously engaged in three or more literary productions, a new book at proof-stage, a revised edition (usually Origin) underway, another manuscript in progress, additions and corrections to translations, solicitations from foreign publishers, the demand for reissues increasing profits and feeding Darwin’s desire continually to correct and update his work (‘for science progresses at Rail-road speed’).3

What made the event at Murray’s most memorable was the co-presence of old books and fancy pigeons - the fantail, the pouter (see figure 2), the almond tumbler - exhibited in cages beside an author’s copy of Origin; these creatures that Darwin bred, killed (usually with chloroform) and dissected, their remarkable figures, feathers and bones used to adorn the pages of Variation, showing the enormous divergence of character, the power of selection, and the artificiality of ‘species’. The period setting and juxtaposition of objects raised questions about Darwin’s place within the still-fluid domain of Victorian letters, his status as a scientific author alongside the successful poets, novelists, and travel writers whom Murray courted in these rooms. To what extent was science still a domain within nineteenth-century literature, rather than distinct from it?4

One of our aims in planning this issue was to consider the Darwinian legacy for nineteenth-century studies. Many of the contributors were involved in various Darwin events, but in a year dominated by public festivities and other staged performances there was often little room for discussion, much less for critical distance. The year also produced a huge outpouring of Darwin publications, special journal issues, companions, new scholarly editions and so forth. We encouraged the contributors to write shorter, more expansive or speculative pieces, and to use the space to reflect on current approaches in the field of literature and science. Darwin was such an important focal point for studies of science and literature in the nineteenth century that we now regard as seminal, above all Gillian Beer’s Darwin’s Plots, and we are very pleased that Gillian agreed to provide a commentary on essays by David Amigoni, Adelene Buckland, and Gowan Dawson, that engage with some of the themes of her work - evolutionary theory, narrative form, metaphor - most directly.

Beer's first publications on Darwin appeared around the time of the last big Darwin year (1982). This was also the first Darwin anniversary in which the humanities played a considerable role. The embrace of Darwin as an object of historical and cultural study was substantially furthered by the devotion of scholars to the meticulous transcription and annotation of his vast collection of surviving manuscripts - notebooks, marginalia, and correspondence - work appropriately dubbed ‘the Darwin industry’.5 Much of this scholarship, begun in the 1980s, is now complete, and the materials are readily available in electronic form, along with new resources such as the hugely successful ‘Darwin Online’, which focuses mainly on printed works.6 As a result, it is now easier and more attractive than ever to do research on Darwin and perhaps only on Darwin. The distorting effects on nineteenth-century studies, already long apparent in the tendency to divide the period into pre- and post-Darwinian epochs, to regard Origin as a cultural watershed, as revolutionary, etc., can take many forms. The ongoing edition of Darwin’s correspondence, which includes letters from around two-thousand people across a broad social spectrum, can be used to show the highly collaborative nature of Victorian science, in which Darwin was just one contributor to a much larger and fractured web of enterprise; but it may also help perpetuate, and even sharpen, a picture of Darwin as the commanding figure of biological science, the centre of a network of observation and experiment advancing in single-minded support of his theory.

One of the questions we encouraged contributors to raise was that of Darwin-o-centrism, and it is gratifying to be able to include a number of essays in which Darwin is conspicuously absent, and where some of the assumptions informing earlier Darwin-centred scholarship are examined. An important theme, explored differently by Buckland, Dawson, Daniel Brown, and John Holmes, is the role of poetry as a counter-authority to the novel, and as a medium for sustaining alternative forms of science (spiritual, playful, subversive) to the positivistic naturalism promoted by some of Darwin’s supporters (and often labeled ‘Darwinism’ by its detractors). In Buckland’s essay, Charles Lyell appears not as the author of a new geological plot (i.e., uniformitarianism), but as a Byronic poet, contending with the status of narrative as romance and writing earth history as mock-epic. More hybrid characters loom in Brown’s essay on poet-physicists, James Clerk Maxwell, Gerard Manley Hopkins, William Rowan Hamilton, and James Sylvester, whose verse was a field of invention and a counter-culture of marginalised practices and persona (metaphysics, the female mathematician). In a series of richly contextualist readings, Holmes shows how a single poem, Mary Kendell’s Lay of the Trilobite, changes from humorous evolutionary satire to religious tract as it migrates from the pages of Punch to the Wesleyan-Methodist Magazine.

Darwin was of course a great lover of poetry, especially as a young man, famously carrying a copy of Paradise Lost on the Beagle voyage, and reading the Excursion twice. Darwin’s reading notebooks are another treasure trove opened by the Darwin industry.7 Now one can search his letters for brief remarks on Adam Bede and Silas Marner, and it will not be much longer before his lengthy extracts and digests of books and articles are also available. Yet these sources, heavily studied as they have been, are relatively impoverished in comparison to the more anecdotal accounts of other Victorian men of science that disclose not only what was read, but how different forms of reading were undertaken, and the relationship between reading and other scientific activities. Dawson shows the advantages of turning away from Darwin (to Richard Owen), and of approaching reading as a material practice, revealing the remarkable convergence of serial fiction and serial anatomy in Owen’s reconstruction of fossil remains and his absorption in the monthly installments of Dickens and Thackeray.

Seriality, which structured the material of fiction, biology, and paleontology, also came to organise the presentation of the individual life. In the biographical form that emerged and eventually predominated in the nineteenth century, the ‘life and letters’, individual character unfolds in serial, cumulative fashion, manifest in the work, achievements, and struggles of daily life, rather than primarily in the god-given soul or ancestral blood.8 Darwin’s own memoir, ‘Recollections of the development of my mind and character’, composed privately and distributed in handwritten copies to his children, was later incorporated, not without some family controversy and considerable excision, in the memorial volumes edited by his son Francis.9 Amigoni shows how this eminently Victorian life of labour and accomplishment, written for edification and emulation, was then recast as ‘data’ at the turn of century by Francis Galton and others in the founding texts of eugenic sociology. Life writing was thus reconfigured like the pedigree of a fancy pigeon, forming part of longer, racial lineage, or dictionary of national biography.

This statistical and eugenic appropriation of individual life (and families) coincided with a shift in inheritance theory, bracketing the individual from the ‘environment’, the manifold influences of which were sometimes acknowledged and yet largely excluded from biology. Angelique Richardson examines this late nineteenth-century divergence from Victorian ‘biology’ with its interplay of self and circumstance. She reflects upon the hardening of heredity that we associate with Mendelian genetics, the ‘modern synthesis’ that followed, and the more recent claims and campaigns on behalf of the selfish gene and genetic determinism. She seeks to reclaim the historical Darwin from contemporary Neo-Darwinists, in part through an alliance between Victorian biology and post-Darwinian genomics.

Some of the leading principles of contemporary genomics are explicated by the philosopher John Dupré in an extended interview with Regenia Gagnier, in particular the distinction between the genome as code or sequence and the genome as material object, enfolded, interactive with other elements of the cell and wider environment, subject to regulation, and always undergoing transcription (though not in this case by Darwin scholars).10 Richardson and Dupré share a criticism of Neo-Darwinism as a highly reductive biology that ignores the array of interdependencies both within and between organisms, and which defines human nature in narrowly deterministic terms. Some of the implications of this post-(neo) Darwinian biology for human freedom are explored by Dupré with reference to his earlier work, The Disorder of Things. What other organism, he asks, could plan a future meeting at a precise place and time and with the aim of discussing a specific agenda, and why would anyone want to do such a thing? Humans are marked by their capacity for self-regulation and determination. It is thus precisely by ignoring the chaotic complexity of life that genetic sequencing achieves the regularity that makes control and forward planning possible (through recombination, ‘engineering’, ‘therapy’, etc.). Reductionist biology is just one manifestation of our peculiar self-determining nature, that is, our ability to transform ‘nature’ through language, to create principles and act on them, to evolve through culture.

How then might Darwin be an object and agent in our own cultural evolution? Perhaps the most challenging outcomes of the Darwin year were several exhibitions on evolutionary theory and the fine arts, one hosted at the Schirn Kunsthalle in Frankfurt, and the other at the Yale Center for British Art and the Fitzwilliam Museum in Cambridge.11 A contributor to both of these events, Julia Voss, reflects on the unexpected ways in which Darwinian theories were inflected in nineteenth and early twentieth-century painting, sculpture, and visual ephemera, and the effect of seeing these connections for the first time. Such artistic appropriations, often wildly fanciful, take us well away from the Dawkinsian version of Darwin as the man who solved the riddle of life. In contrast to the iconic, polemical, two-dimensional (and literally cardboard) naturalist who was depicted repeatedly in the anniversary year, the writer Emily Ballou offers an alternative Darwin who is a metaphor of creation, endlessly branching, questioning and reformulating the language of life. How then to frame Darwin as a cultural organism, a metaphor, without fixing him, as did Julia Margaret Cameron in her photographer’s studio on the Isle of Wight in 1868, his great illuminated head and bearded genius frozen in glass? (see figure 3) 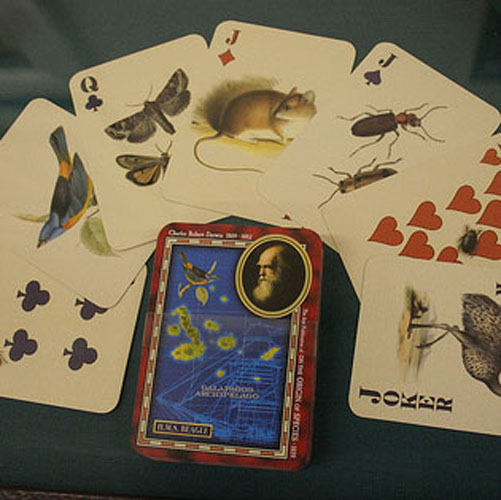 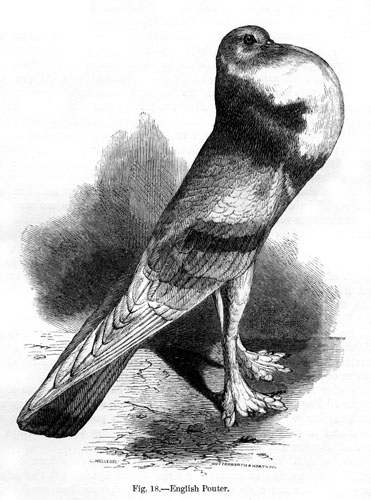 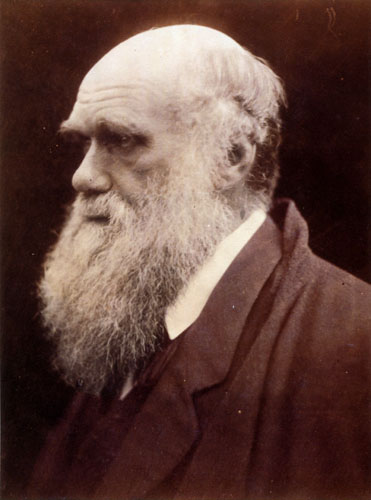