In my response to Tim Barringer’s piece, I emphasize the importance of extending one’s frame of reference when discussing transatlantic artistic connections to the consideration of as many different art forms as possible – including photography, and magazine and book illustrations – in order to get as full a picture as possible of the two-way flow in transatlantic artistic influences.This fuller picture notably extends the degree to which images of non-white subjects are seen to be in circulation. I also draw attention to the ways in which American and English artistic circles intersected outside as well as within these two countries, a point reinforced by looking at American women sculptors in Rome in the 1860s, paying particular attention to the work of the part African-American, part Native American sculptor, Edmonia Lewis. In her work can be seen a complex set of attitudes towards her subject matter that remind one forcefully of the many racial and cultural strands coming together in new American art.

When I first listened to Tim Barringer’s paper – and then again, on re-reading this revised version – I found myself particularly drawn to his emphasis on the fluidity of nineteenth-century American identity. This fluidity was very apparent internally, involving both geographical mobility and ethnic interactions of many kinds, and it also was dependent upon the importance of seeing the new country as – to use Barringer’s term – ‘one node within the flux of the Atlantic world.’ I was intrigued, too, by his argument for the postcoloniality of American art: an argument that, as he works it through here, makes us think about the complex role of residual, abiding affections for a former power in a post-colonial culture, something that was arguably far stronger in the United States than in many such countries.1 But rather than pursue this line, I want to open up the idea of transatlantic artistic intercultures in ways that render them even more multi-layered than his rich paper suggests.

Barringer begins by discussing the expatriate American artists domiciled in London around 1800. He brings home very clearly their receptivity to dominant English trends: one might well turn this point round to show how in this period, North American subject matter was also readily anglicized. When the Iroquois Joseph Brant and the Cherokee-Scot John Norton visited London in the late eighteenth and early nineteenth centuries, their availability as icons of heroic resistance may be gauged by the poses in which they were painted (Brant sat for George Romney in 1776 and for John Francis Rigaud and Gilbert Stuart in 1786; Norton for Thomas Phillips in 1816). Viewed from below, light falling on their faces – and, in the case of Norton, rather ominously on the blade of his tomahawk – their stances, against dark backdrops or wild skies, follow the developing style of Romantic heroic portraiture. This sense of grandeur is also apparent in several of Hill and Adamson’s early portraits of the missionary Peter Jones, employing the new art of photography, and showing him seated with the magisterial authority of both spiritual and temporal leader (see fig. 1).

Looking at early British photographs of Native Americans is a reminder of what we miss if we restrict our attention to high art. In moving from one type of high art to another – from portraiture to landscape painting – Barringer leaves open a number of other areas of visual culture in which we may test his hypotheses. We might think, say, about the panoramas that conveyed the scale of American landscapes perhaps even better than huge canvases could do (Banvard’s 1848 Geographical Panorama of the Mississippi and Missouri Rivers, for example), or the power that illustrations to American fiction had when it came to defining a visual impression of America and its inhabitants. In this latter case, it matters little – at least in terms of the responses of the original readership – whether the illustrator was British or American: the idea of America was conveyed equally by both. Take, for example, the way in which the shifting archetype of the Indian crossed the Atlantic embodied in successive illustrations to James Fenimore Cooper’s The Last of the Mohicans (1826). In 1838, an unnamed illustrator for The Novelist, which serialized Cooper’s novel, presented scantily-clad Indians with the characteristic shaved head and erect pony-tailed crest of the Woodland Mohicans (see fig. 2). By 1900, Cora’s assailants appear in the fully feathered headgear associated with Plains tribes such as the Sioux: a telling indication of how these latter Indians had come to provide the iconic image (reinforced by Buffalo Bill’s Wild West) of Native Americans (see fig. 3). Likewise, illustrations to the British editions of Uncle Tom’s Cabin (1852) provided a vivid sense of slave markets, of various public forms of cruelty, and of hunting down African-Americans like deer.

The point that I am making here develops and complicates Barringer’s sense of the transatlantic: the artists, again, are British interpreting America, yet in this case, they are subject to the influence of American illustrative art, rather than making American topics fit British-generated conventions. This is the place to note, too, the importance of several widely circulating American journals within Britain (especially Harper’s Magazine) when it came to creating a visual sense (whether realistic or allegorical) of, say, the Civil War, or of such episodes as the Cherokee removal, as well, of course, of everyday life. One of the immediate lessons that follow, moreover, from paying attention to the place of the visual within print culture in the mid nineteenth century, is that non-white America plays a far more prominent role than is the case if we look only at high art forms.

Barringer makes a strong case for the power wielded by the practices of museum curatorship in particular, and art historical institutions in general, when it comes to the retrospective formation of American art as a discrete and distinctive field. This is undoubtedly true, but it is important to acknowledge, too, the fact that America’s desire to possess its own, recognizable art is one that has been consistently present since the mid-nineteenth century, even if the terms of this desire have been shifting. I want to approach and complicate this generalization through an example that makes us see the cosmopolitan implications that inhere in the fact that American and English art interacted outside as well as inside these countries: the extended group of Anglo-American women sculptors, painters, and patrons living in Rome in the later 1850s and 1860s, drawn there by a tolerant environment where women could be accepted as professional artists and live outside heterosexual norms. Perhaps in sculpture even more than painting, American collectors anxiously validated their own claims to cultural capital by supporting an ideal style with its roots in antiquity, and this preference inflected the subject matter of, say, Harriet Hosmer or Emma Stebbings.2 American national creative energy was defined not in terms of a rupture with the past, not as a demystification of its authority, but rather, as requiring its authority as a condition of its being. The authority in question, though, was emphatically not British, but European.

One specific example to bring this home: a notable member of the ‘white Marmorean flock’ of Roman woman sculptors – as Henry James rather snarkily called them – was Edmonia Lewis, the first professional African American and Native American sculptor.3 Her father probably came from Haiti; her mother was part Ojibwa. Her membership of this Anglo-American Rome circle gave her the space, and confidence, to adapt classical traditions in sculptures that directly referenced her own dual ethnicity. She enjoyed a small success in Boston in the early sixties, earning enough from the sale of medals of anti-slavery campaigners, and from plaster copies of her bust of Robert Gould Shaw, the white colonel in charge of the otherwise all-black 54th Massachusetts Regiment in the Civil War, to pay for her voyage to Rome, but it is highly doubtful that she could have developed her career in the States to anything like the same extent. She produced some small ‘fancy pieces’ for the tourist trade, executed some busts of visitors to Rome, including Longfellow, and her unusual Cleopatra, showing the ruler at the moment of her death, was very well received at the 1876 Centennial Exposition in Philadelphia.

But Lewis also adapted classical traditions in sculptures that directly referenced her dual ethnicity. Her depictions of Hiawatha and Minnehaha were doubtless influenced by the popularity of Longfellow’s poem. She was certainly not the first American to employ Indian themes in ideal sculpture, but she chose neither the script of defeat used by Peter Stephenson when he borrowed the pose of the Dying Gaul for The Wounded American Indian (1848-50), nor the conversion narratives or westernization that mark other sculptural treatments of ‘Indian maids’ and Pocahontas. Lewis’s natives, albeit relying on the commercial appeal generated by Longfellow’s poem, wear traditional costume, and possess a self-contained confidence, quite notable at a time when dominant culture on both sides of the Atlantic was writing Native Americans into narratives of extinction or assimilation (see fig. 4).

Lewis’s treatment of themes related to slavery and African-American culture is equally striking. Her versions of Hagar – the Egyptian maidservant of Abraham’s wife, Sarah, in the Bible, who was cast out into the wilderness – was readily understood by Lewis’s contemporaries as symbolizing the oppressed conditions of African-American women: they illustrate well Lewis’s own statement that ‘I have a strong sympathy for all women who have struggled and suffered’. By contrast, however, Forever Free! (1867) is a celebratory piece (see fig. 5). In its energetic triumphalism, it breaks with the decorum of most neoclassical sculpture, contrasting with both the fey masculinity of Hosmer’s Waking Faun, produced the same year, and the martyred, submissive posture of Hiram Powers’ Greek Slave, which, pre-emancipation, had widely been taken as a comment on slavery. Barrett Browning had apostrophized Powers’ figure:

Pierce to the centre,Art’s fiery finger! and break up ere longThe serfdom of this world! appeal, fair stone,From God’s pure heights of beauty against man’s wrong!Catch up in the divine face, not aloneEast griefs but west, and strike and shame the strong,By thunders of white silence, overthrown.4

The marble is still white, but Lewis has used it to make the black voice eloquent.

The studios of these sculptors were popular stops on the aesthetic tourism circuit; the works, and personalities, of these American women artists were as much discussed in Britain as within the United States, their art the product of the artistic heritage of the land of their residence as well as of their own cultural roots – whether white, black or red. Working away from home, Lewis, in particular, had the ability to challenge not just her own country’s aesthetic conventions, but the way in which American art was conceived of in Britain. A woman of colour creating a national art for the post-bellum period on her own terms, Lewis’s work offers a reminder of the complex currents that swell about in the White Atlantic of Barringer’s excellent paper. He has rightly indicated the artificiality of the version of American art that has been constructed retrospectively. What I think follows from his paper is the compelling need to restore to it the sense of flux – in its forms, influences, and origins – that characterized it during the nineteenth century: a protean quality that, for many at the time, could be seen to stand for the rapidly developing country itself. 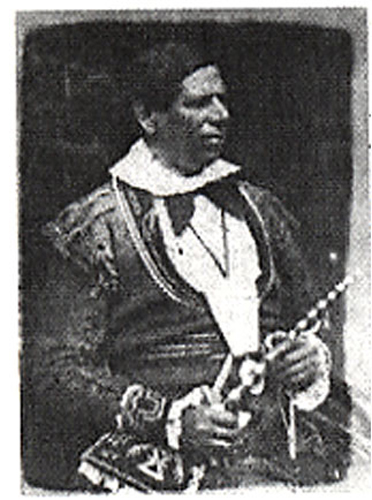 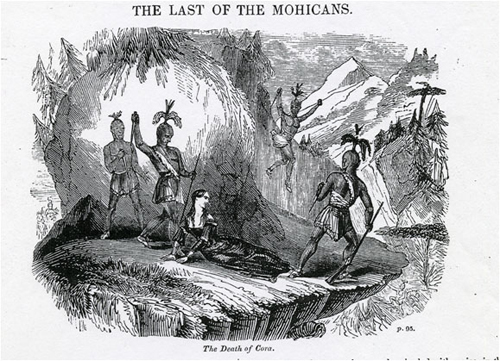 Fig. 2 'The Death of Cora' (1838), illustration from The Novelist's serialisation of The Last of the Mohicans. 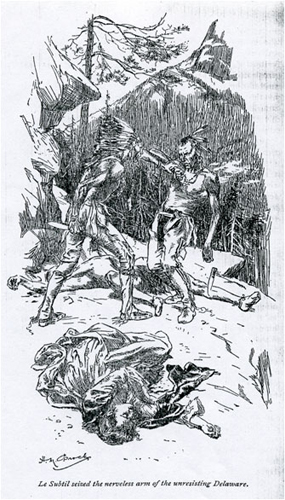 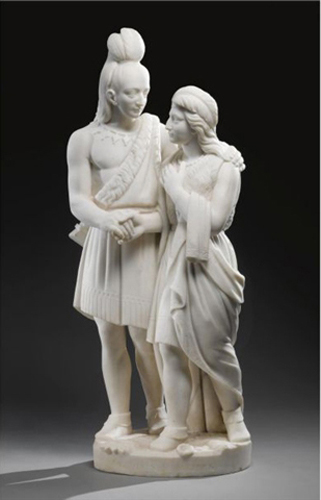 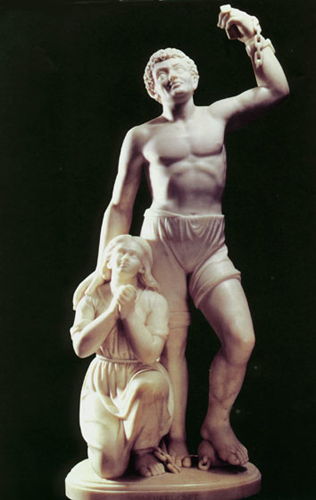