When Annie Louisa Swynnerton’s large, double nude painting Cupid and Psyche (1890) (Fig. 1) was exhibited at the New Gallery in 1891, it caused a stir. ‘Mrs. A. L. Swynnerton shocks the taste of her observers’, wrote art critic F. G. Stephens for the Athenaeum, ‘with a Cupid and Psyche such as the world never saw before.’1 The picture bears all the marks of her mature signature style: a loose and suggestive handling of paint, bold application of colour, and confident modelling of form. In places, paint is built up so thickly that it is raised above the surface of the canvas, lending a sculptural, tactile quality to the bodies and their surroundings. The work also displays her sensitive, intuitive, and (for her time) unorthodox portrayal of the body — especially the female body — as vital, lived-in. Though Cupid and Psyche depicts both male and female forms, it is Psyche whose body is literally foregrounded. She is portrayed as curious, outstretched arms actively searching for knowledge of her mysterious lover and for the truth of her situation. Both figures are imbued with the virility and awkwardness of youth, engaged in a clumsy dance of desire and reluctant restraint. Cupid, ears protruding from a boyish face, angles his body and lips towards Psyche at the same time as he jerks his left arm and leg away from her. Their flushed, ruddy cheeks and the blueish tint to their skin suggestive of the veins beneath reveal the life force pulsing within them, an effect redoubled by the layered, dimensional paint and rapid brushstrokes. 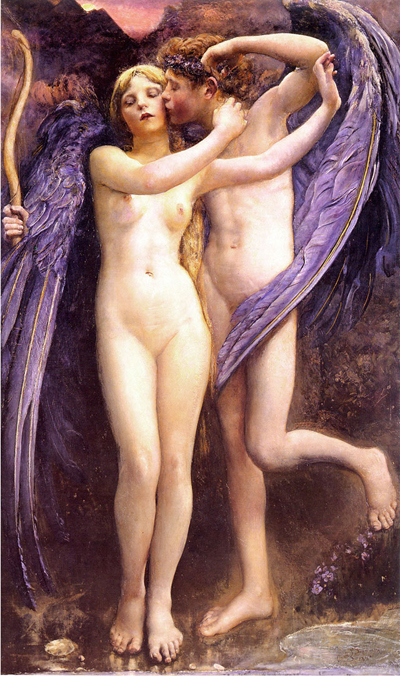 It is this effect, this vital realism applied to the nude form, that took critics like Stephens aback. Psyche’s features, he grumbled, were ‘coarse and “blubbered”’; her face was ‘vulgar’ and her flesh ‘without the sweetness, evenness, or purity of youth’ that the Victorian public expected from high art renderings of the female nude (p. 610). M. H. Spielmann, writing in the Magazine of Art, branded Swynnerton ‘a realist, not an idealist’, and the Art Journal critic Claude Phillips made a similar point: ‘the artist, in love with the unidealised truth, has not departed far from her vigorous and over-British young models.’2 But the latter reviewers also found great value in her particular mode of realism, identifying in her art a quality that remains palpable today: Swynnerton’s work moved beyond mere imitation to capture the real and vibratory rhythms of life itself. ‘Her flesh-painting’, observed Phillips, ‘has a certain quivering reality not to be found in many renderings of the nude by contemporary English artists’ (June 1891, p. 189). Spielmann concurred: Cupid and Psyche ‘actually quivers with the pulsations of life’ (p. 261).

Swynnerton was used to ruffling feathers. Ambitious and independent, by 1890 the Manchester-born painter (1844–1933) had long been forging her own path in the British art scene. ‘Annie Swynnerton: Painting Light and Hope’ (23 February 2018–6 January 2019), the recent retrospective at Manchester Art Gallery where Cupid and Psyche was among the works on display, makes as much clear. Swynnerton refused to limit herself to one genre, producing and exhibiting landscapes, portraits, and grand mythological and allegorical paintings alike. She had studied in Paris at the Académie Julian in the late 1870s and lived intermittently in Italy from the 1880s onwards, and her art shows engagement with a number of international movements, ranging from Impressionism to Symbolism. Though the exhibition successfully embeds Swynnerton historically, explaining her networks and her active participation in key artistic dialogues of her day, it also highlights the singular visual style for which she would eventually gain broad renown. Her friend and contemporary John Singer Sargent, who displayed at his home works by Swynnerton alongside those by Monet, believed her nothing short of a genius.3

Swynnerton was also a lifelong advocate for women’s rights, both in arts education and beyond. She was a member of the Manchester Society of Women’s Suffrage, and in 1874 was one of nine women artists successfully to petition the Manchester Academy of Fine Arts, the professional artists’ association of the city, to admit women. Five years later, she founded the Manchester Society of Women Painters with her close friend and colleague Isabel Dacre, hoping to redress the gender imbalance in arts education and support women art students ‘desirous of more thorough training, wider experience, and a higher culture’ (Herrington and Milner, p. 15). In 1922 Swynnerton made history as the first woman to be elected to the Royal Academy of Arts, a long overdue official recognition of her significant ability and outstanding contributions to British art.4

And yet, like so many other women artists of her generation, Swynnerton has been all but forgotten, an injustice that ‘Painting Light and Hope’ much helps redress. The exhibition, the first Swynnerton retrospective in nearly a century, was ambitious in scope, with the thirty-six pieces on display ranging from her early forays into studio portraiture to her late grand symbolic works, successfully showcasing her changing style and the breadth of subject matter and range of genres in which she was proficient. It is no small feat to have marshalled this material into a narrative readily understandable by a public as yet unfamiliar with her art, but curators Katie J. T. Herrington and Rebecca Milner managed both to situate Swynnerton’s work in its artistic, political, geographical, and sociocultural context, and to draw out key thematic and stylistic areas of interest across her oeuvre.

‘Painting Light and Hope’ reveals the extent to which Swynnerton’s art was related to her proto-feminist beliefs. Her paintings foreground women, of all ages and from all walks of life, and her sensitive and generous depiction of these subjects can be seen in works ranging from The Young Mother (c. 1880s) and The Southing of the Sun (1911) to the more explicitly political portrait Dame Millicent Garrett Fawcett, CBE, LLD (c. 1899–1920). In addition to highlighting Swynnerton’s activism, ‘Painting Light and Hope’ emphasizes the artist’s fascination with sunlight and its effects. From the 1880s until her death she preferred to paint outdoors, representing light with a tactility and dimensionality which the exhibition identifies as the most dominant and immediately recognizable feature of her art. In paintings like An Italian Mother and Child (1886), for instance, the work with which the exhibition opens, light is figured as literally substantive: it is applied so thickly that, in its white impasto, it takes on a sort of material, physical reality, not unlike the flesh and clothing of the picture’s subjects. For Swynnerton, light allowed for a truer depiction of the natural world: painting outdoors and capturing daylight effects helped her perfect the drawing and modelling of form (Herrington and Milner, pp. 7, 25). The dynamic, almost tangible light that she portrayed contributes singularly to what for me endures as the most remarkable quality of her works, identified by her earliest reviewers: her capacity to lend a sort of material, ‘quivering reality’ to her scenes. This capacity is, as evident in Cupid and Psyche, inseparable from her unique handling of paint.

Reviewers of Cupid and Psyche remarked upon the pulsating realism evident in Swynnerton’s flesh painting. But it was not merely the physical body to which her brush gave life. The reality her paintings convey is more than mere realism; her works capture something of the vital, ‘quivering’ power underlying reality itself. One formidable effect of the assemblage of paintings in this exhibition is that it allows this particular subtle quality to shine through. In almost every painting, from nudes to portraits to mythological subjects and landscapes, her brushstrokes, application of paint, and emphasis on corporeal light create the understated but unmistakable sense that the constitutive forces of the world, in all their vibratory splendour, are appreciable to a viewer.

This effect is especially evident in her modest townscape Capri (c. 1900), a brightly coloured work dominated by layered pinks, greens, and yellows and painted in heavy, undulating strokes conveying the ripple and shimmer of the water in the Italian sun. Swynnerton’s striking decision to paint a landscape picture vertically as opposed to horizontally reveals where her interests lie: more than half the ‘landscape’ of the painting, and the portion where the paint is most thickly applied, is dedicated to light-mottled water. ‘At Capri’, recalled Swynnerton in 1923, ‘I sat on a rock in mid-stream every day for three weeks to get the motion of water in the sunlight’ (Herrington and Milner, p. 72). It is notable that she was not trying merely to capture the visual effect of sunlight on water, but rather the motion, the force, of the water itself, enabled or illuminated by the light of the sun. Indeed, her repeated return to this site tells us that what may appear a sort of quick outdoor oil study of transient light effects is in fact a synthesis of many days and hours of observation: time is built into the work, and the sight we see captures something of the real spirit, the true underlying and ‘quivering reality’ of Capri.

At its heart, Cupid and Psyche is also a work about the revelation of truth, of uncovering the reality of one’s situation. In the moment depicted by Swynnerton, Psyche does not yet know the identity of her lover, who visits her only after dark. With heavy-lidded eyes barely closed, and full, red lips gently parted, Swynnerton’s Psyche betrays her curiosity, groping blindly towards her mysterious lover. She need only flex her fingers and she will know the truth: she will feel the silky feathers of his wings; the soft, reddish curls of his hair. In Swynnerton’s vision of the scene, Psyche forever hovers on the threshold of revelation, her dramatic left hand both reaching out and pausing, recoiling, at the same time. As though to redouble the point, the sun just peeks out over the horizon. Illumination is imminent.

Of course, for the twenty-first century viewer, a realistic nude does not carry the same shock value it did for Swynnerton’s contemporaries. But the sense of capturing something beyond a mere representation of the real — of capturing ‘quivering reality’ itself — has a power to move us that is timeless. To view Swynnerton’s oeuvre is to experience that power. Her art transcends mimesis to evoke the vitality of the world in all its fragmentary, essential, and pulsing glory.