Ironically, the woman responsible for the first English translation of the full set of Giorgio Vasari’s Lives of the Most Eminent Painters, Sculptors, and Architects (1850–51) can be said to have no ‘Life’ of her own. Even the publishers of her books identified her only as ‘Mrs. Jonathan Foster’. Apart from one letter of November 1886, sent from Bergamo and signed ‘Eliza Foster’, there is a singular lack of biographical data about the author already dubbed the ‘old traveller’ in articles published in the Art Journal in 1856 and 1857: ‘Suggestions of Subject to the Student in Art by an Old Traveller’ and ‘Talk of Pictures and the Painters by an Old Traveller’. Introduced by the journal’s editor, Samuel Hall Carter, as an ‘accomplished lady’, she is described as being possessed of a ‘very rare’ combination of requirements: ‘extensive reading, acquaintance with many languages, the advantage of travelling in several countries, and above all an intimate acquaintance with Art, in the past and in the present.’

Mrs Foster had previously collaborated with Hall’s wife on a volume of Stories and Studies from the Chronicles and History of England aimed to instruct young people (1847). The same year she appeared as ‘E. Foster’, the translator (from German) of Leopold von Ranke’s History of the Popes for H. G. Bohn’s Standard Library (3 vols; 1847–48). She is named as ‘Mrs. Jonathan Foster’ in her five-volume edition and translation of Vasari for Bohn’s Library which followed two years later (Fig. 1). 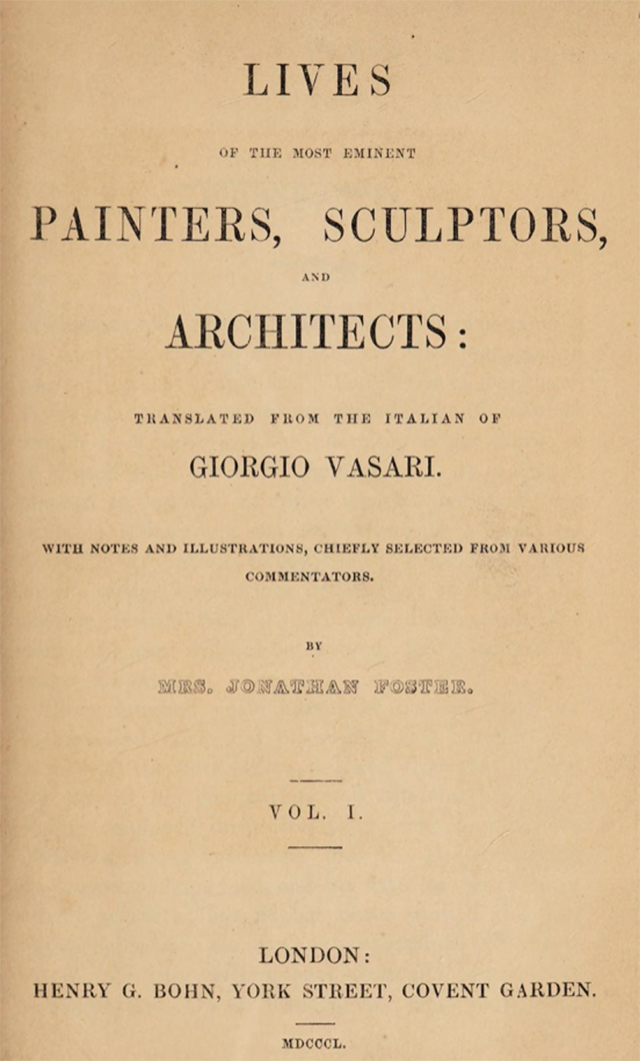 Her linguistic gifts, wide travels in Britain and on the Continent, and her genuine love of art are fully demonstrated in these publications. So, too, is her commitment to the ‘noble office of the historian’ which, in the preface to her translation of the History of the Popes, she said required ‘unwearied patience in research [and] a pure conscientiousness and profound respect for the sacredness of Truth’ — all qualities evident in the careful and abundant annotation of her Vasari translation. Mrs Foster’s contributions to art writing are both representative and real. Her articles in the Art Journal represent the informed taste and moralizing opinions typical of mid-Victorian appreciation of art and of its social importance. Her translation of Vasari brought the Lives to a wide English-language readership for the first time. Its very real value in doing so is proven by the fact that it remained in print and in demand through the nineteenth century.